Can These Tudor Walls Be Fixed???

ScrapperGal
August 2019 in VFK Developer Ideas!
First off, I LOVE the new Tudor walls!  I and many others have wanted these for years!  Developers, THANK YOU for making them for us all! I noticed last night when playing with the first release many pieces DO rotate to a forward facing position!  YAY!  I for one love to build some things in that direction!  Then when trying to build with these wonderful new items I noticed that a few of the pieces, Medieval Tudor Wall 1x1, Medieval Tudor Wall 1x2, and Medieval Tudor Wall 1x4  would not rotate forward in one of the two diagonal BEAM patterns.   Each of these pieces will rotate forward, but only give us two of three possible looks/patterns. Then tonight I noticed one of the wall pieces from the second release, the Medieval Wall 2x4 lacks one of the two possible BEAM patterns no matter which way it's rotated, it is only giving us two of the possible 3 patterns..
Hope these pictures are worth a thousand words and show what I mean and hopefully can be fixed. 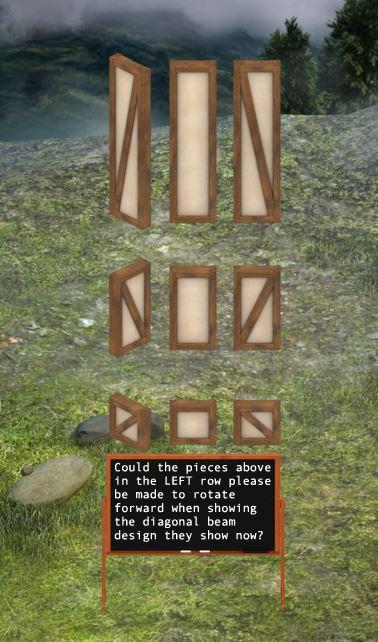